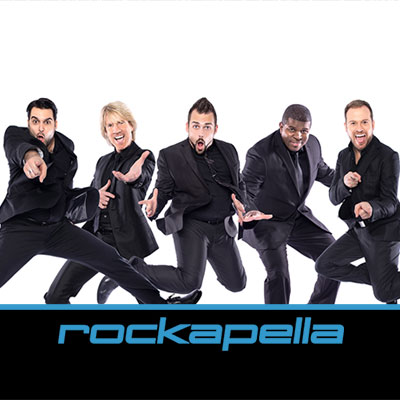 As one of the progenitors of the astonishing full-band sound of “contemporary” a cappella, Rockapella has shown every audience the raw power of pure vocal talent and originality. Since the early ’90’s when they first achieved national television fame on PBS’s Where In The World Is Carmen Sandiego?, they’ve toured the globe and provided a funky powerful soundtrack to several generations of vocal music fans, while keeping it all fresh along the way. The current Rockapella line-up features Scott Leonard (since 1991, High Tenor), Jeff Thacher (1993, Vocal Percussionist), Calvin Jones (2013, Tenor), Mitchell Rains (2016, Tenor), and Bryant Vance (2016, Bass).